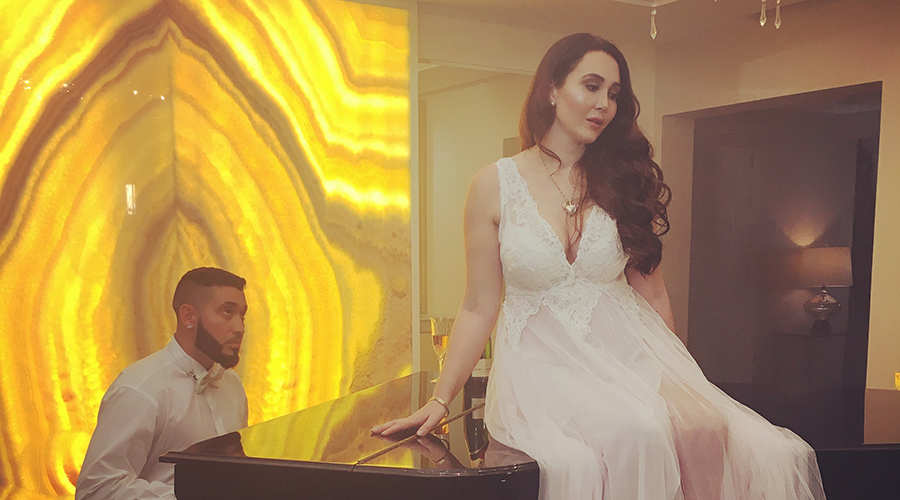 Dubbed the “Adele of Trap music,” Aria Nichols is an exciting up-and-coming artist, ready to take the Electronic music world by storm. Raised in New Zealand, but based in Dubai, Aria kick-started her musical career during her final year at medical school. She teamed up with talented producer Don Fuego, forming a solid tandem and fusing deep, authentic songwriting with EDM.

Solid early influences including The Cranberries, Alanis Morissette, The Carpenters, Shakira and more recently Tove Lo, Ellie Goulding and fellow New Zealand star Lorde – Aria has put her signature on Trap, adding Jazzy undertones, unique melodies and soulful, emotive lyrics to the distinct heavyweight drops associated with the genre. November 2017 marked Aria Nichols’ debut, with her single “See Where This Goes.” A highly-creative burst of contrasting emotions merging together angelic vocal dexterities with a moody Trap instrumental. The emotional lyrical hooks create a dream-like atmosphere that precedes Don Fuego’s devastating drops. The result is a high quality rollercoaster ride of production that will have you hooked from the first play. “See Where This Goes” is the first of a series of breathtaking Aria Nichols creations that will hit the shelves in the months to come – keep an eye out! Our friends over at Matt Caldwell PR supplies this exclusive interview to serve as an international introduction to Aria Nichols and her exquiste talents.

Hi Aria, how are you and what’s going on in your world at the moment?

AN: Hello! I’m working hard on my music right now, I’ve just finished a stunning music video and I’m preparing for upcoming release show which will feature my cover art in a new hotel opening in December.

AN: I’m originally from New Zealand but am now based in Dubai, UAE. It’s a pretty exciting place to live and YES we can drink here!

AN: Vocally I use jazzy undertones, which sound great with Trap. I like my melodies to be unique and I love to surprise. The drops really highlight the emotions of each track.  My songs are very honest (sometimes embarrassingly so) but I love to put myself out there and use both my lyrics and vocal range to show the depth of the emotions I feel when writing each track.

AN: I spent road trips listening to The Carpenters and The Mammas & Pappas with my father and I got addicted to Nirvana with my older brothers. I started writing at the age of 5 and I still value the simplicity I heard in those melodies. Alanis Morisette and Christina Aguilera inspired me to write from the heart and use my range to add emotion to my songs.

How did you get involved in the Dance music business?

AN: I met a local radio DJ (DJ Moe from Channel 4) who asked me what music I listen to on radio and shamelessly I told him I don’t listen to radio unless I’m very bored. He immediately recognized that as something songwriters do and asked me if I write… I was writing songs every day but I thought that was completely normal, something everyone does! I had never even told anyone that I had hundreds of songs on my iPhone. Next thing I knew he had set up a meeting with a producer named Don Fuego. I arrived at Fuego’s studio with 5 songs I had written for him the day before.  I told him I loved Trap and we recorded “See Where This Goes” in one take.  I cried when I heard it mixed.  It was magical, it still is.

Where would you like to see yourself in the months ahead?

AN: I’m really enjoying the momentum at the moment, I’m working hard to hone my live performance in preparation for my scheduled shows. There are a lot opportunities in EDM right now!

Which is your ultimate career dream?

AN: I want to inspire people through my music, many of my songs were like pep talks to myself – I want others people to come away from my shows feeling that strength, feeling connected.

Can you tell us about any upcoming releases and what has been your career highlight so far?

AN: My debut single “See Where This Goes” was released in November. Making the music video was an amazing experience, I loved every minute of it.  I learned aerial silk acrobatics just for the music video – it took it to another level, I’m very excited to share it!

AN: I’ve been listening to a lot of R3hab! The way he has skyrocketed is amazing and his connection with fans is what music is really about. It’s also been very inspiring to follow the journey of other artists, particularly those based in the UAE – seeing their success inspires me to stay true to myself.

If you could choose, who would you like to collaborate with?

AN: I would love to work with Kygo, it would be a really interesting sound. I love interesting!

Tell us something not many people know about Aria?

AN: I was in my final year of medical school when I met my producer and started making music … so I’m also a Doctor!

AN: A huge thank you to DJ Moe and to my amazing producer Don Fuego for getting me on this path!

Video of the Week November 28: Gardens of God "Whistler"

No Replies to "Aria Nichols: The Adele of Trap Music"