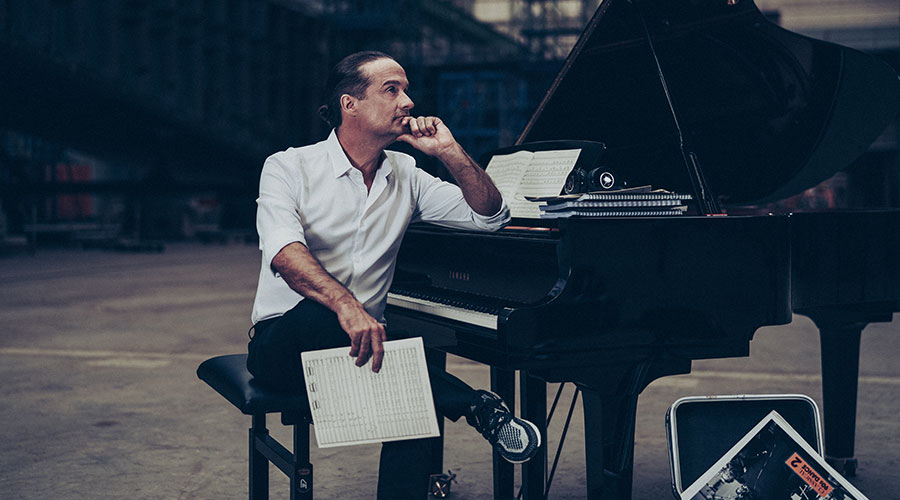 Germany’s Alex Christensen got his start in electronic dance music in the early 90s as the former frontman of U96 (the techno dance outfit that crashed the charts with “Das Boot” and “I Want To Be A Kennedy”). He also enjoyed a successful production partnership with former Enigma (“Sadeness, Pt. I”) co-founder Frank Peterson, overseeing the European pop chart hits of Prince Ital Joe featuring Marky Mark (yep, Mr. Wahlberg himself) and Rollergirl (singer Nicole Safft, “Dear Jessie”), who later became his wife. So if anyone knows 90s Euro-dance, it’s Mr. Christensen. He made a big splash with

his 2017 and ’18 albums featuring The Berlin Orchestra, Classical 90s Dance and Classical 90s Dance 2, fusing classical orchestrations with dance-pop hits of the era. The concept isn’t new—James Last and Louis Clark Conducting The Royal Philharmonic, for example, had been tackling classical compositions and pop and dance songs in this manner, at least instrumentally, since the 70s and early 80s.

However, in the realm of production values, Christensen’s first two collections stand technically unsurpassed, punctuated by highly recognizable radio and dance floor gems from the 90s (Snap!’s “Rhythm Is A Dancer”—one of the producer’s strongest tracks to date, Rozalla’s “Everybody’s Free,” “What Is Love” by Haddaway, among others). His reinventions can best be described as faithful to the originals but possessing a healthy extra dose of élan supplied by their finely tuned classical settings.

With Christensen’s third installment in the series, we are given more of the same formula with increased emphasis on the vocalists supporting the tracks. The set starts off a bit shaky with the familiar ear candy of “Gypsy Woman (La-Da-Dee),” and though the arrangement is bubbly, the grittiness and indelible urban club shuffle of the original sung by Crystal Waters doesn’t translate all that well to this format. However, the song’s vocalist, Linda Teodosiu, nails the uplifting feel of Ultra Naté’s #1 US dance chart hit “Free,” from 1997, which neatly translates to a classical retouch.

Ace of Base’s “The Sign” is well performed by Natasha Bedingfield, and the production is on point in the same way in which Abba’s songs often sound exciting when performed with classical arrangements. Bedingfield also handles the unsinkable track “Missing” with just the right tone, and the lush instrumentation accentuates the subtle nuances of the piece.

Christensen isn’t above pushing the envelope, as demonstrated by the emotional interpretation of vocalist Giovanni Zarella on Cher’s once seemingly untouchable smash, “Believe.” Here, the carefully executed arrangement (and unique approach) achieves the mandatory inspirational feel for which the song is so famous. In the same vein, Thomas Anders, former lead vocalist of the quintessential 80s German dance-pop group Modern Talking, unexpectedly wraps up the album with a smooth retake of the late Melanie (La Bouche) Thornton’s nugget, “Wonderful Dream.”

Throughout the Classical 90s Dance trilogy, there are spot-on moments and, yes, other times (though decidedly few) where the tracks come dangerously close to having a kitschy Broadway feel. But all three editions are collectively surprising, inventive and remarkably entertaining. Back in the day, when Louis Clark and The Royal Philharmonic were at the top of the pop chart with their monster hit “Hooked On Classics” (you’d have to have been around in 1981 for that event), the gimmick was adding a dance beat to a medley of famous classical compositions.

With Classical 90s Dance 1, 2 and 3,  we have dance compositions adding a classical flavor. It’s hard to say which works better (though it’s important to say Christensen’s work doesn’t generally feel “gimmicky”), but in both cases, the beauty of classical music and the core-thrilling joy of dance music often come together magnificently, bridging tastes and generations for a remarkably positive experience.

Both music genres have the same positive effect on people, and when combined, the results can be exhilarating. So who, then, is listening to Alex Christensen’s albums? Who knows? It may be the now 40+-year-olds who grew up with 90s dance energy, or perhaps it’s classical audiophiles (who’s recording genre has been virtually decimated with the demise of classical record labels over the past several years). Regardless, Christensen’s work is being supported with high international chart positions on Spotify and enormously popular live performances throughout Germany—and that means he’s definitely hitting the right note.