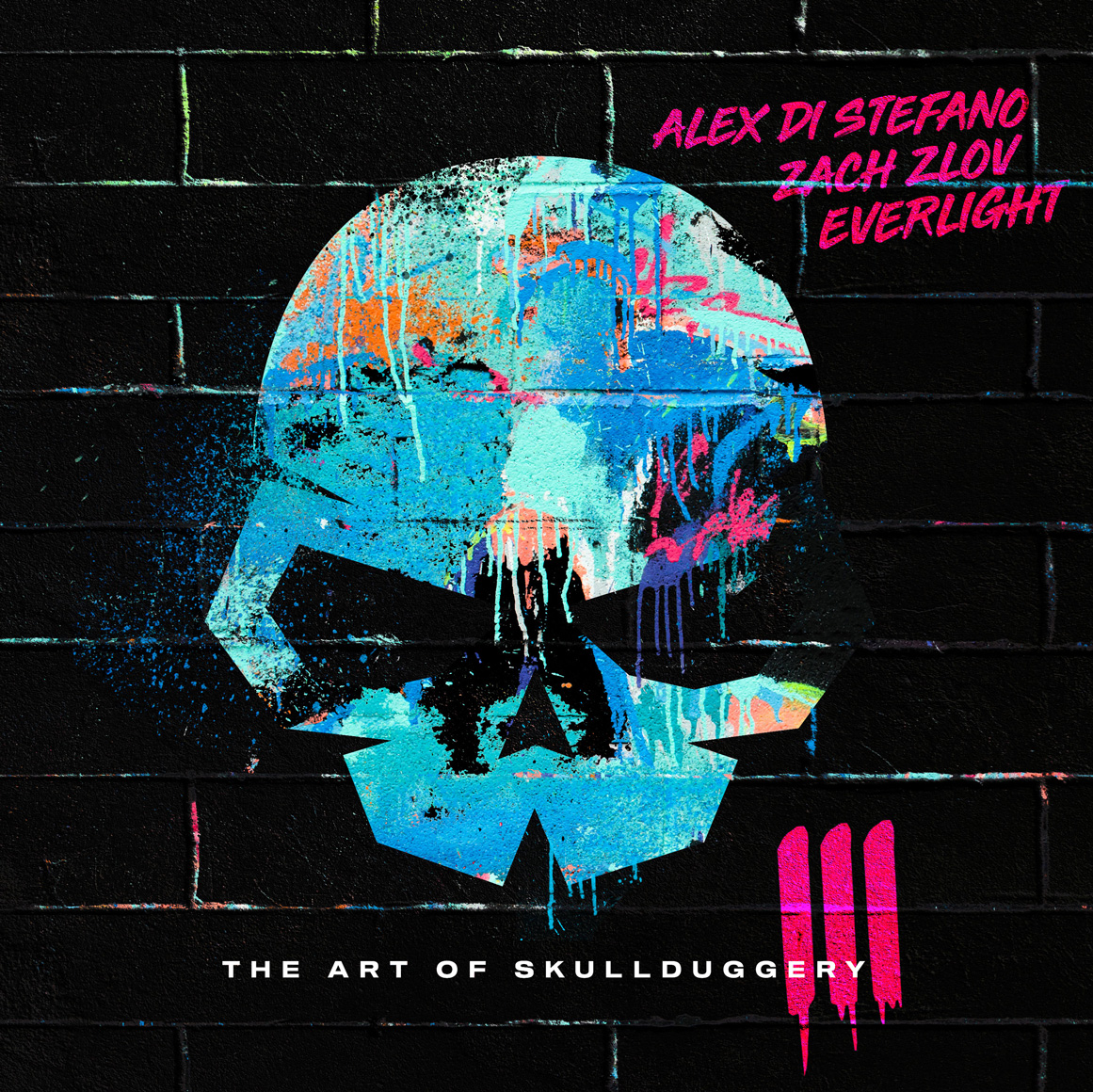 Where the others tap out… stylistically, the Skullduggery starts! Following last year’s second edition (co-mixed by Beatman & Ludmilla), February sees Greg Downey’s label marque back with a bang. Better make that three bangs in fact, as not only has Skullduggery gone ‘Vol. III’, it’s also expanded plans to add a third disc.

Greg is dedicating this volume to his label’s brightest artistic talents, and thus has passed its mix-reins to Alex Di Stefano, Zach Zlov and EverLight. With them, they’ve brought close to sixty tracks and near two hundred & forty breakneck minutes of fast, furious and downright dangerous-to-know dance music. Over that course, you’ll find new audio dynamite from Cold Blue, Activa, Chris Schweizer, Solarstone, Stoneface & Terminal and dozens upon dozens of others of both new & established.

‘The Art Of Skullduggery Vol. III, Mixed by Alex Di Stefano, Zach Zlov and Everlight drops Feb 25.
Let the scheming, subterfuge and all round Skullduggery recommence!

As the album moved to completion, in a message to fans, Greg gave his thoughts on the year ahead. “So here we are 2022! A chapter of moving forward and looking to the future in all aspects, after what has been a roller-coaster of Covid-19 madness. Each and every one of us will have a different story to tell. One of challenges, setbacks, victories, resilience and everything else in between – I am super excited to see what this next year holds.

I have to say that music was the thing that saved me during this time. Keeping the same routines and schedules as before, running Skullduggery and continuing to put my own and the other artists’ music out to the world. This one constant alone was enough to keep me focussed and positive that – one day – things will improve for us all. So thank you to everyone who supported the label, the artists and myself during the time we were all locked down. The music is what kept us together and will continue to do so.”

First to the ‘Vol. III’ fore then is Alex Di Stefano, and while the Italian’s showcased some tougher mettle previously, you’ve never heard anything quite like this! Firing its starting gun are ‘Out Of Order’ & ‘ORKA’ from David Forbes, while the tellingly-titled ‘Weather The Storm’ & ‘Fight For Your Right’, courtesy of Renegade System and Kriess Guyte further up its frontend thunder. Deeper in, Alex is joined by label honcho Greg for ‘Among Us’ (Chris Schweizer on the mix), while his own powerful reworks of Solarstone’s ‘Seven Cities’ and ‘Shine’ by Cold Blue build an unstoppable head of pressure for the mix.

A man with something to prove perhaps, Zach Zlov – Skullduggery’s newest newcomer, weighs in with no less than ten of his own productions. Representing a full half of his mix, inside the first eight tracks alone, he drops new, desk-hot studioware including ‘Starborn’, ‘Into The Jungle’, ‘Ergo’, ‘Chemicals’ & ‘Nightfall’. Having played fast & loose inside the Psy, Breaks & Tech-Trance triangle, he expands its stylistic themes further with a deuce from Hassan Jewel and ‘Digital Deaf Tones’ from Zlov’s own mentor, Enrique Calvetty. Activa pres Mekk V’s ‘Rotation’ and Beatman & Ludmilla’s ‘Terrible’ are next to the laser, before Zach signs off with the flourish of his own ‘Noviembre’.

Of his participation, the Mexican DJ/Producer said, “Being a part of Skullduggery has been the most incredible and buzzing experience in my career, and taking on this compilation mix is an honour. To the guys who made and contributed their music, huge thanks for being a part of this project!

In one of his first mix-comp showings, EverLight also brings plenty of his own brew to the ‘Vol. III’ party. ‘Renegade Bass’ and ‘100%’ (w/Tasso) provides the sandwich for the tech filling of Ed Lynam’s ‘Catecholamine’, as the masked wonder puts both hands to the mix’s pump. ‘Dangerous’, ‘Raucous’ and ‘Razor Blade’ are title-and-description as one, as the UK DJ gets ungodly on its midsection. With his remix of Greg Downey’s ‘Sense’, he draws down a touch, only however to allow the full weight of ‘What A Rush’ from Kriess Guyte and Blashear’s ‘Future Self’ to exact maximum set-closing damage.

On receiving his Skullduggery call-up, EverLight said: “One of the best things about working on a collaborative project like this is getting you’re your coolest and most talented mates involved. With this mix I wanted to deliver a slice of the techno-trance movement, which sits firmly at the heart of what I do. All loaded though with plenty of Skullduggery’s secret sauce of course! I’m sure you are going to love it, and I’d like to extend my thanks to all of you who enjoy the tracks I’ve carefully created and curated here!

Ready to blast you into March, ‘The Art Of Skullduggery Vol. III’ – mixed to absolute perfection by Alex Di Stefano, Zach Zlov and EverLight – is available to pre-order/save from today [https://blackhole.lnk.to/artofskullduggery3]. Don’t leave February without it!

No Replies to "Alex Di Stefano, Zach Zlov And Everlight: ‘The Art Of Skullduggery Vol III’"