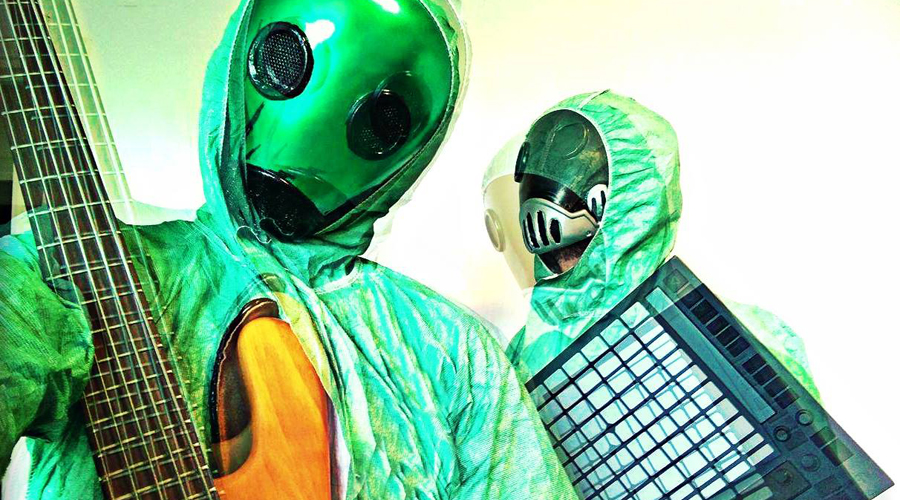 Every once-in-a-while, an album comes out that blows away the listener. Deserving of wide spread attention, Children of the ATØM and their self-released “Ø Isn’t O” is one of those albums. From start to finish, it is full of amazing and tantalizing electronic textures and layers designed for the musically adventurous. The album’s backstory goes as such: “Two Norwegian volunteers found their death in the Fukushima nuclear disaster. Their souls were able to escape and travel to Girona where they got into the bodies of two young musicians. It was a slow possession, a strong fight that lasted hours which ended with the fusion and victory of the two musicians, now known as Children Of The ATØM.” “Ø Isn’t O,” gives you 8 tracks spanning a range of styles from Ambient to Hard Techno and like I said in the beginning, it is fantastic. The music throughout is theatric, epic, bold, and danceable with tight grooves and rhythms. Track by track you become a full participant to the music, simply by listening, and doing so, it becomes easy to imagine what their live shows would be like. It has been said that, on stage, they’re decked out in nuclear protective suits and masks, transforming their live shows into “electronic” performance art through their music and visuals. If this is the case, it is a perfect fit to the musical narrative. If you are reading this review, You must check out the music for yourself. I have a feeling that once heard, becoming a fan will be a no-brainer.

The album opens up with ‘First Steps (Intro)’ with an apocolyptic visage that seemlessly leads to the second cut ‘See u Soon,’ taking you down a dark road with driving drums and bass. Things get crazy with the third track ‘Spirits.’ The high enegry dance groove, buzzing electronics, thumping drums and evil like vocals make this track one of the highlights. ‘MØMA’ has more of dance floor feel featuring shuffling drum beats, low end synth pulses and clicks, conversational styled vocal samples under an influence of Industrial Dance Music. On ‘Radioactivity,’ the track begins with sounds from a Geiger Counter, tolling electronic generated bell sounds, big vocals, thumping kick drums, rhythmic high hat cymbal sounds, grinding and buzzing electronics. The last six minutes of the album are the tracks ‘HØRD,’ a tightly grooved driving dance track that heavy on the low end of all of the instrumentation used. The closing title track ‘Ø Isn’t O’ is just a short one minute, theatrical spoken word with minimalistic underpinnings, soft keys and distortion, kind of nightmarish. Like I said, this is an album of songs that is full of dance, industrial slants, dark twists, futuristic and apocalyptic themes that is a delight to listen to. No Replies to "Children of the ATØM-Ø Isn’t O: Album Review"