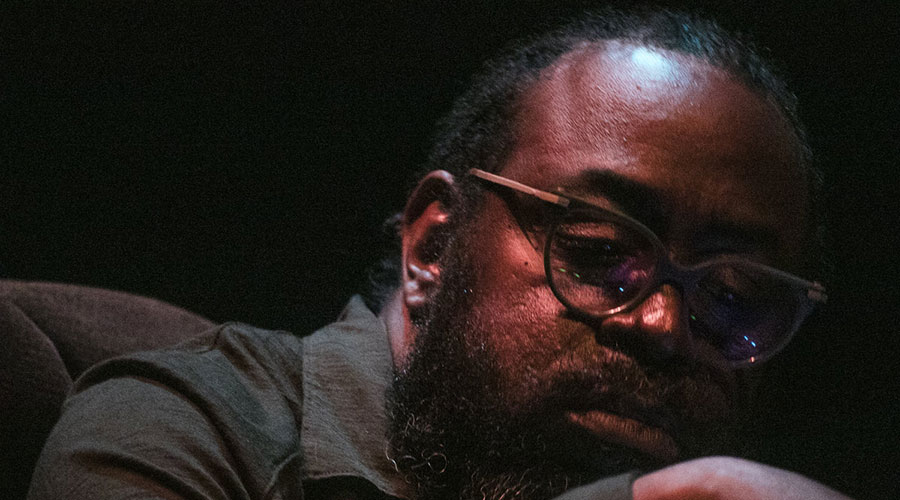 Dax Pierson is a musician/producer who has called the East Bay home for 20 years. He was co- founder of the bands Subtle and 13 & God, a touring member of left of center hip-hop group Themselves and an associate of the Anticon collective. In 2005 Subtle encountered black ice in the middle of the country while on tour and flipped over, leaving Dax with a spinal cord injury in the 5th and 6th vertebrae. Since his individual fingers are now paralyzed, Dax has switched to using a laptop controlled with iPad apps in order to produce. The last 12 years have been spent exploring the possibilities that technology could offer, often with time-consuming learning curves. His work is currently informed by limitations, college radio segues, hip-hop, ‘90s post-rock, odd time signatures, new techno, ambient drones, bobbing head beats and sentimentality.

Pierson’s debut solo LP is coming via San Francisco’s Electronic powerhouse imprint Dark Entries Records and Oakland’s Ratskin Records collective. The Oakland-based underground legend, has pushed the boundaries of experimental electronic music with his soul- moving opus “Nerve Bumps; A Queer Divine Dissatisfaction,” aproject that took two long years in the making. Pierson blends hip hop, jazz, John Carpenter-esque arpeggios, trap/anti-trap-influenced percussion. Go to tracks such as “I Slay The Pain” reiterate that although Pierson has to live his life as a quadriplegic, this does not define him as an artist or as a person. The cinematic “For The Angels” plays as a masterclass in heart and body-moving rhythms and undulating synthesizers. Pierson directly confronts the listener on “Snap,” an act of solidarity with the disabled community. Sputtering orchestral swells become encapsulated by splintering shards of Pierson’s voice, evoking his relentless determination to learn new music production methods as well as share his experience with losing certain physical abilities. The album’s closing track, “NTHNG FKS U HRDR THN TM,” is a perfect distillation of the varied emotions explored on the album. For Pierson, music is his lifeblood, both as a creator and a listener. Dax’s guiding mantra throughout this journey has been a quote from choreographer Martha Graham: “No artist is pleased… There is only a queer divine dissatisfaction, a blessed unrest that keeps us marching and makes us more alive than the others.” “Nerve Bumps: A Queer Divine Dissatisfaction” is a beautiful gift and a testament to his dedication and love of music which we all should be thankful to receive.