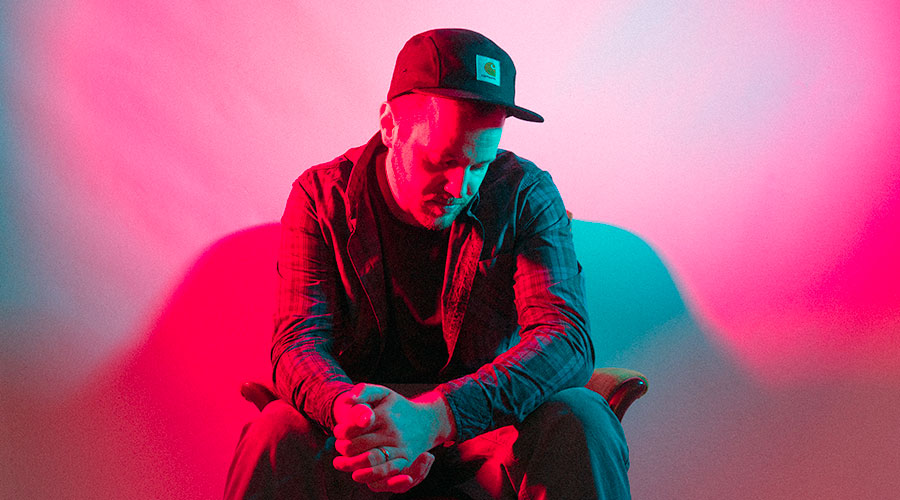 With “Imagine Gold,” Frameworks displays extensive exploration into sampling and analogue; citing long night drives back from shows as an inspiration that runs through the album, the intricacies, attention to detail and ability to expand on musical ideas are what sets “Imagine Gold” apart from his previous work, and are a key component of him being so warmly welcomed into Emancipator’s Loci Records family.

Frameworks has neatly drip-fed singles from “Imagine Gold” ahead of the full release, giving clues as to its direction with four diverse tracks. The album in its full form expands on that diversity to incorporate different influences such as the house-colored title track “Imagine Gold” to “Sandstone,” a trip-hop inspired piece that ensures Frameworks showcases his full array of wide-ranging musical tastes. Downtempo “Delphina” introduces the album, as electronic and synthesized elements provide the musicality, underpinned by acoustic live drums – a theme that exhibits a foundation that runs through “Imagine Gold”’s entirety. The idea of cohesion is strong across the tracks. With clever use of evolving musical ideas that transcend individual songs, highlighted by the return of the chordal theme in the album’s penultimate track “Rotations.” While songs such as “Dark” show his considerable study of analogue with a heavily treated vocal making use of distortion and pitching, in keeping with the albums’ story.
For this Q&A with Matt Frameworks Brewer, the Downtempo/Hip-Hop producer/music maker takes time out to discuss his excellent new album, favorite producers, 2020 and a bit more.

You have a new album out now titled “Imagine Gold.” After listening to the singles that have been released: “Coming Back,” “Breaking Down,” “Fires” and most recently “Monday”, would you say they are a good representation of the overall feel the forthcoming LP?

Frameworks: Yeah.. I think those tracks gives listeners a good indication of what to expect from “Imagine Gold.”

How long did it take you write and produce “Imagine Gold?”

Frameworks: I was writing “Imagine Gold” for around a year and a half. It came at a time in my life that I was feeling quite together, like I had pretty clear foresight into what kind of album I wanted to create.

Where do you draw your inspiration from and when writing, what comes first, the melody or the music direction?

Frameworks: Inspiration vs motivation, I think I’m motivated to write often, but inspired?, generally after a spell of not writing for me. I don’t tend to have a set way I write, Sometimes it starts with a few piano chords, other times perhaps a recorded foley sound.

What will define success for the new LP?

Frameworks: Difficult question. I think I’ve successfully made a third album that I’m really proud of. As difficult as it is, I try hard to not put expectations on what the record will or won’t do. If the record moves people, if it encapsulates a moment or a feeling, I will be happy.
Who are your favorite downtempo producers? Hip-hop producers?

Have you heard the new Gang Starr album? If not, I recommend it. Are you a fan?

Frameworks: I’ve heard one of the single “Family and Loyalty” – I Dig It!

What’s happening in Manchester these days?

Frameworks: So, I’m actually based just East of Manchester in a little Village called Tintwistle. Manchester’s close, around 30 minute drive an acts as a sensory tool I can dip my feet in and out of when the mood suits. Manchester has always been and always will be a creative hub in the North West. It seems to nurture creatives.

Looks like 2020 is off to a good “gig” start and you’ll be embarking on an extensive coast to coast US tour. Have your toured the US before? Any hints as to what the 2020 live show will be like?

Frameworks: I’ve played around the US a few times. I’m actually working on the new live set up at the minute, trying to give myself a lot more freedom to take the sets to different places depending on the room I’m playing in. Bringing a bit more of an edit feel in places to enable be a bit more spontaneous.

Seeing that you are spending the first couple of months in the United States, what does the rest of 2020 look like for you? Will there be dates in the U.K., Europe and beyond?

Frameworks: Right now we are looking at a bunch of other dates, but nothing confirmed as of yet! I’m keen to get this album out there and get in-front of people though.

Frameworks: Big love to My Family, Friends , Loci Records, Madison House and of course Beatselector Magazine for the interview. x

Stream it at Spotify. Buy it here. No Replies to "Q&A With Frameworks"