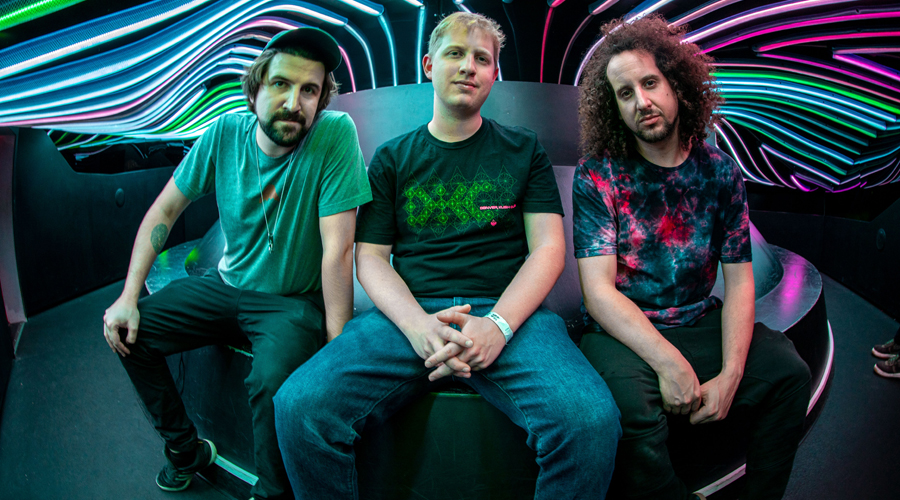 “Instinct” contains 10 tracks and showcases the trio hitting their stride with trippy jam cuts that are tight in the groove and blazing with jazz-rock guitar licks, funky rhythms, a touch of drum and bass, disco beats, strings, horns and a whirlwind of electrifying electronics.

Opening it all up is “Pangolin.” The track is greasy, super retro and funky as hell.  Reminiscent of a 70s and 80s throwback, the track features Chris Karns on the Turntables providing cool samples and expert scratching that jumpstarts the album.

The next three cuts, “Caterpillar,” “Chrysalis” and “Night Moth” illustrate the trio’s thematic imagination with a collective tight and cohesive vision.  While the tracks are funked-up, jazzy and “in the pocket,” one can easily get caught up in the subtle trance elements, which are used to embellish and to transition in to the core melody and rhythm of the track. Check out “Night Moth” and you’ll get it.

Half way through, you come to “Land Sloth” a slightly bluesy cut, once again flexing Donohue’s guitar muscle soaring above cascading electro and a driving beat.

“Dexter’s Day Out” has an interesting backstory. According to Kevin Donohue, during an interview with 303 Magazine.com, the track was created with Josh’s dog and “de facto” Executive Producer title-holder “Dexter” in mind.  The track continues with its killer synth and electric piano lines, deep groove in the bass, and soaring guitar.

A true highlight on this album comes in the form of “Reptile” featuring Nicholas Gerlach. Trumpets take the lead with a funky melody paving the way for brief interludes of Gerlach’s sax lines. About halfway through the song, Fairman’s bass offers up a short reprieve before the guitars heat up and bring the song to a close with Gerlach’s epic solo. “Fisher Cat” dives back in to the jazz-rock arena with a slightly psychedelic glint, nothing new to talk about here, it is quite simply a track that demonstrates high caliber musicianship.

Now, you’ve arrived at song number nine, “Snapping Turtle,” which gets down with a slow bounce with some tasty d’n’b inflection and reverb that perfectly compliments the interchanging  and exchanging of keyboard and guitar melodic ideas.

“Polar Bear” comes in at a slower pace with the electronics more out in the front and presents a cooling down of sorts from the blazing hot songs on “Instinct.”

Sunsquabi’s ability to stretch out and explore Jazz-Rock improv while incorporating dance-oriented beats and groove bass rhythms proves that these three are creating dance music that really is unlike their contemporaries.

Donohue, Fairman and Anderson perform in a tight and cohesive manner delivering ten songs that easily evolve with beautiful melodies and top-notch musicianship.

It would be easy to go ahead and lump in Sunsquabi with other dance-oriented  “jam band” acts like Big, Gigantic, STS9, GRiZ and the like, but what separates them from the pack is their ability to build on a simple basic and improv melody and develop it into a complex and enjoyable song.

So, with this latest Sunsquabi LP, you get ten spectacular examples of their high-grade musicianship to behold and to plant the seeds for the next one.

No Replies to "Sunsquabi-"Instinct": Album Review"